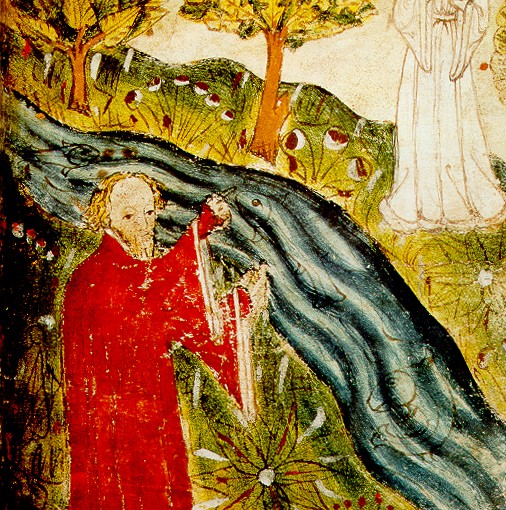 I will be pursuing a thesis focused on Grendel’s mother from the Old English poem Beowulf, Guinevere’s mother from the Arthurian romance The Awntyrs off Arthur and the Pearl maiden from the allegorical Middle English poem Pearl. I will be consulting the following editions of the primary texts: The Beowulf Manuscript translated and edited by R.D. Fulk (Harvard 2010), The Awntyrs off Arthur edited by Thomas Hahn and available online thanks to Robbins Library Digital Projects and Sir Gawain and the Green Knight, Pearl, Cleanness, Patience edited by J. J. Anderson (J. M. Dent 1996).

I will be exploring three potential connections between these texts: the depiction of landscape, how knowledge is gained through a strange encounter, and the representation of these women as figures of authority. It was the similarity in the descriptions of landscape in The Awntyrs off Arthur and Beowulf that inspired this topic. I hope that Catherine Clark’s Literary Landscapes and the Idea of England 700-1400 will support and inform this aspect of my research topic (D.S. Brewer, 2006).

I would particularly like to pursue the presence of water in the texts and their association with these female characters. The article “Living on the Ecg: The Mutable Boundaries of Land and Water in Anglo-Saxon Contexts” in A Place To Believe In: Locating Medieval Landscapes edited by Clare A. Lees and Gillian R. Overing will be most helpful in discussing this topic (Pennsylvania 2006).

In relation to the landscape of Pearl I have found The Pearl: An Interpretation by P. M. Kean most helpful as it provides a detailed discussion of the various landscapes within the poem (Routledge 1967). I will be focusing specifically on the following chapters: “The Garden of Loss”, “The Earthly Paradise” and “The Heavenly City”. Within this text Kean provides a chapter entitled “Encounter” which leads me to the next aspect of this research project, knowledge gained through strange encounters.

In Pearl and The Awntyrs off Arthur the Pearl maiden and the ghost of Guinevere’s mother communicate significant otherworldly insights to the protagonists of the texts. As well as Kean’s work I will also be consulting Pearl in its Setting by Ian Bishop in this regard (Blackwell 1968). Bishop provides a comprehensive interpretation of the allegory and symbolism within Pearl; I hope that the chapter discussing “The Conduct of the Debate” will offer an interesting perspective on the eschatological discussion that takes place between the dreamer and the Pearl maiden. Bishop’s work will equally benefit my research by refining my understanding of the Pearl maiden; there are several chapters dedicated to analysing the rationale for the depiction of the Maiden: “The Figure of the Child”, “The Function and Meaning of the Image of the Pearl”, “The Description of the Maiden” and “The Significance of the Maiden’s Livery”.

The strange encounter in the romance The Awntyrs of Arthur directed me to the macabre in literature and I will be consulting Philippa Tristram’s Figures of Life and Death in Medieval English Literature to increase my awareness of this tradition (Elek 1976). I have also found Stephen H. A. Shepherd’s “The Awntyrs off Arthure at the Terne Wathelyne” in Middle English Romances most helpful in this regard because the glossed and annotated text is accompanied by a concise criticism that highlights possible sources (Norton 1995). Shepherd also includes The Trental of St. Gregory which is alluded to in The Awntyrs off Arthur and two exempla about similar domestic macabre encounters from the Gesta Romanorum. Other works that I will rely upon for a comprehensive understanding of the text include: “The Awntyrs off Arthure” in A. C. Spearing’s Medieval to Renaissance in English Poetry (Cambridge 1985) and “The Awntyrs off Arthure: Structure and Meaning A Reassessment” by Helen Phillips in Arthurian Literature volume twelve edited by James P. Carley and Felicity Riddy (D.S. Brewer 1993).

In relation to Beowulf I will be suggesting that Beowulf’s decision to descend to Grendel’s mother’s lair is symbolic of seeking this otherworldly knowledge and I will be supporting this notion by relating it a similar scene in Grettir’s Saga translated by Jesse Byock (Oxford 2009). Unlike the Pearl maiden and the ghost of Guinevere’s mother, Grendel’s mother is not vocal. In this instance I would like to suggest it is the conscious inversion of the language before and during her fight scene with Beowulf and Hrothgar’s apprehension regarding the sword Beowulf finds in her lair that conveys a similar sense of foreshadowing and a supernatural knowledge of future events. This will require a thorough reading of different translations.

I will be using Fulk’s translation as my principal text because his edition places the Anglo Saxon poem within its manuscript context. Hugh Magennis’ analysis of the various translations of Beowulf in his work: Translating Beowulf: Modern Versions In English Verse will do much to inform this aspect of the project (Boydell and Brewer 2011). I hope to learn more about the translation process by consulting the essay “The Philologer Poet: Seamus Heaney and the Translation of Beowulf” by Daniel Donoghue in his Norton Critical Edition: Beowulf: A Verse Translation: Authoritative Text, Contexts, Criticism (2002). An examination into the depiction of Grendel’s mother would be incomplete without addressing the representation of women in Old English literature; New readings on women in Old English literature edited by Helen Damico and Alexandra Hennessey Olsen will be crucial to strengthening my argument (Indiana 1990). Other texts that will prove useful in this regard include: Language, Sign, and Gender in Beowulf by Gillian R. Overing (Illinois 1990), Writing Gender and Genre in Medieval Literature: Approaches to Old and Middle English Texts edited by Elaine Treharne for the English Association (D.S. Brewer 2002) and Poetry, Place, and Gender: Studies in Medieval Culture in Honour of Helen Damico edited by Catherine E. Karkov (Michigan 2009).

The depiction of Grendel’s mother, Guinevere’s mother and the Pearl maiden is an important aspect of the research project because these female figures are simultaneously portrayed as figures of authority and othered within their respective texts. I will be re-reading the “Introduction” and “Myths: Dreams, Fears, Idols” from Constance Borde and Sheila Malovany-Chevallier’s translation of Simone de Beauvoir’s The Second Sex, as she provides an in-depth documented history on the depiction of women as Other (Jonathan Cape 2009).