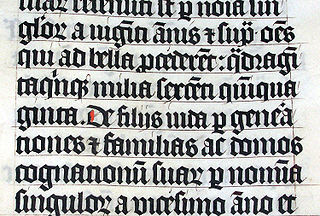 If you look up the dictionary to define the word palaeography, you’ll likely meet a standard definition that will succinctly inform you that palaeography is the study of ancient writing. While the definition of palaeography can be simply tied down, the subject matter in this field of study is more complex than its definition initially alludes.

Firstly in relation to the word “writing” there’s an important distinction to be noted between two forms of writing, handwriting and scripts. Handwriting refers to a person’s individual handwriting and it’s characterised by its idiosyncratic nature. Scripts however, differ from handwriting because they are a standardised form of writing that were systematic in their composition involving many rules that had to be adhered to when writing.

While there are many differences in handwriting that are peculiar to the person’s individual hand, there are also grades of distinction within script hands, known as book hand and document hand. Book hand was reserved for monastic works, and used predominantly by monastic scribes writing religious works. Document hand refers to a faster, more cursive script that was used by secular scribes to write legal documents.

The peculiar thing about these script hands is the fact they influenced each other in turn; document hand was eventually elevated to book hand and became formalised and book hand became more cursive in its form as a result of the influence of document hand.

The Gothic script is an example of a standard book hand. There were difference grades of Gothic script, and a professional scribe would have a catalogue of different scripts that they could produce for commercial purposes. The most expensive and time-consuming of the Gothic scripts were the high grades which involved a diamond-shaped finish to each character.

An example of a document hand that was elevated to book hand is the Anglicana script (1280-1440). This script is characterised by the looped aspect to its characters and was designed to be written quickly.

Even from this brief introduction it is clear that palaeography is far more complicated than its straightforward definition implies. The study of ancient writing is a diverse discipline replete with an abundance of distinctive scripts, which I anticipate studying in more detail.